It is a commonplace to say that the world has changed since 11 September. This also holds true for those dedicated to humanitarian action. The cause of the change for us, however, is not so much the attacks themselves or their vicious character. As defined, this war pits terrorism against freedom, and those who imperil humanity against those who defend it. While the main focus has been on Afghanistan, the repercussions have swiftly embraced the entire planet. Like the Cold War, this is an open-ended, global fight for both interests and values.

This new war presents a number of challenges for independent humanitarian action and the principles that underpin it. Second, by questioning the applicability of international humanitarian law, the anti-terrorism campaign could threaten fundamental restraints on the conduct of warfare, thus weakening the protection and assistance to which civilians are entitled. Third, worldwide attention to conflicts, and the victims they generate, is shifting, making it more difficult to respond to crises at the margins.

During the s, humanitarian concerns were subject to intense political calculation. The common thread was that humanitarian concerns were often put at the forefront of public discourse, either as a smoke-screen to mask the absence of genuine political engagement, or to justify intervention in fact motivated by other interests. With the advent of the global war on terrorism, the situation is much clearer.

The US government declared that it was going to war in defence of national security interests.

In this view, humanitarian action, whether conducted by military forces or by civilian agencies, should be subordinate to a broader politico-military objective. Thus, in Afghanistan coalition air forces dropped food to Afghan civilians, while simultaneously bombing military targets. Special military units engaged in civil affairs, such as rebuilding bridges or digging wells. The effectiveness of these interventions is questionable: the unmonitored dropping of individual food rations from high-flying planes provides little relief for those most in need, even if this food reaches them.

The usefulness of the food drops in winning over Afghan support is also doubtful. Northern Alliance commanders sealed off some drop zones in order to confiscate food rations, and several children were injured after mistaking cluster bombs for food rations. Meanwhile, the authorities in neighbouring allied countries such as Pakistan essentially sealed their borders, trapping would-be refugees in the violence they were seeking to escape.


The assistance provided by the military coalition in Afghanistan is not humanitarian action, which is required by the Geneva Conventions to be neutral, independent and impartial. Throughout Afghanistan, coalition soldiers still wear civilian clothing and carry concealed weapons. 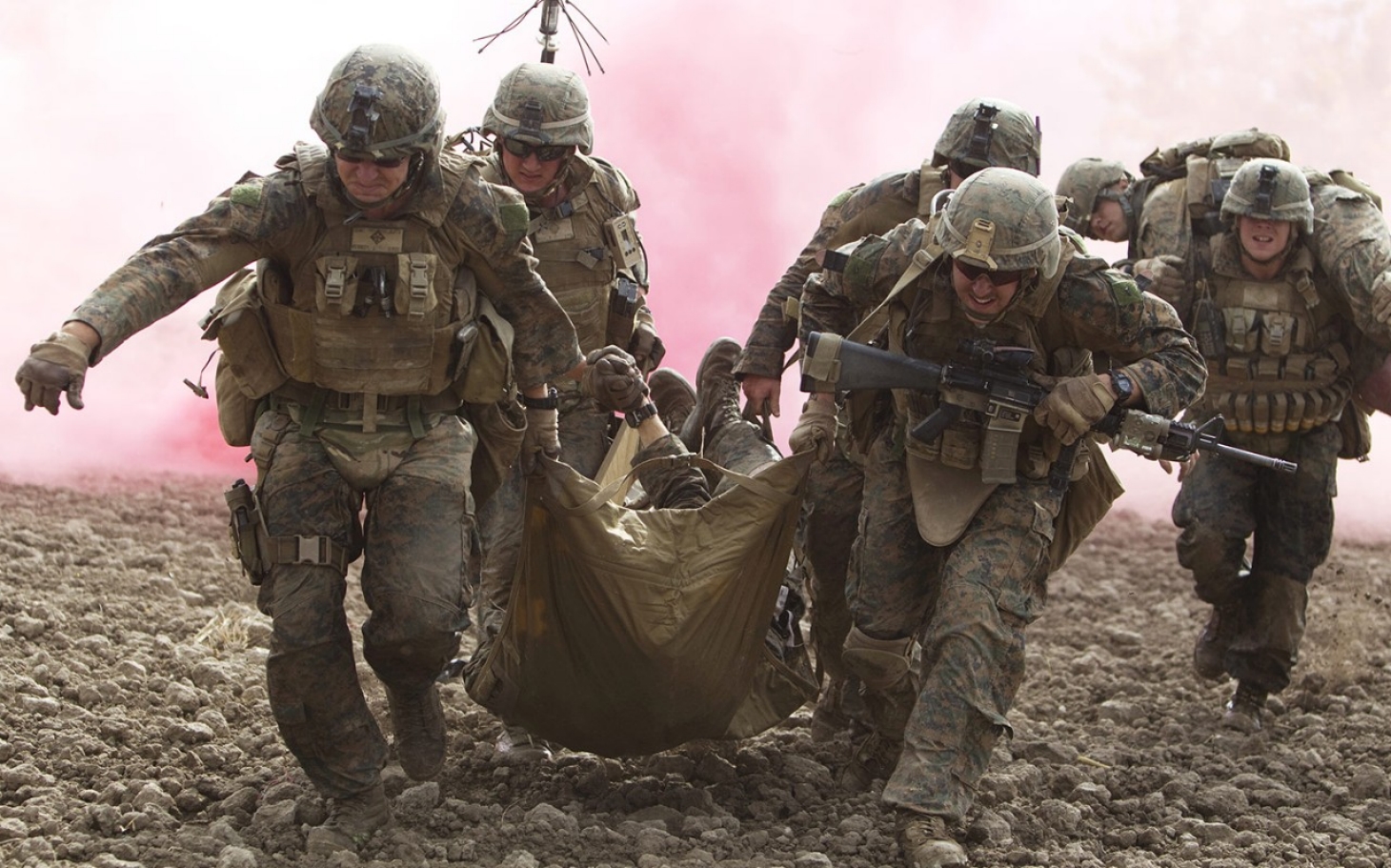 While some take part in combat operations, others engage in relief activities, and their civilian clothing is meant to facilitate contacts with the local population. In south-eastern Afghanistan, where foreigners are often viewed with suspicion and where US forces continue to battle presumed Taliban fighters, this has raised tensions and contributed to preventing unarmed humanitarian personnel from accessing rural areas. In Kandahar, MSF teams are often asked if they are US soldiers, and have been warned not to venture into outlying areas. For more than 20 years, maintaining a clear humanitarian identity in Afghanistan has been crucial for the provision of assistance.

Now, however, humanitarian actors will find it increasingly difficult to establish the trust that is necessary for this assistance to take place. The second major challenge to humanitarian action concerns the role of international humanitarian law.

This Map Shows Where in the World the U.S. Military Is Combatting Terrorism

Humanitarianism is based on a key distinction between combatants, who are considered legitimate targets of violence, and non-combatants such as civilians and prisoners of war, who should be spared. This cardinal principle is enshrined in international humanitarian law. Whatever the aims of belligerents, humanitarian actors seek out the victims of violence. The terrorist actions of 11 September raise disturbing questions about how to combat an ill-defined enemy that, through its actions, has placed itself outside the prevailing normative framework governing warfare.

To deal with this challenge, the US is considering jettisoning international humanitarian law. The prevailing description of the conflict relates not only to the type of military operations and forces being employed, but also reflects claims to unambiguous moral supremacy. By defining its cause as just and vitally important, the US believes it should fight this war unfettered by cumbersome international rules.

Deciding that the Geneva Conventions did not apply to al-Qaeda and Taliban combatants captured in Afghanistan was a clear indication of this. This line of thinking contains serious dangers. It is based on the false premise that forces acting in the name of a greater good cannot commit abuses. There is a precedent here: in the Somalia intervention, forces operating under the UN banner refused to be bound by international humanitarian law, under the assumption that, because they were carrying out a peacekeeping mission in the name of the international community, they could by definition do no wrong.

After UN forces bombed hospitals, humanitarian compounds and civilians, this stance was reversed, and peacekeeping forces agreed to be held to international standards. The same logic applies to the war in Afghanistan. Incidents such as the US bombing of ICRC warehouses in Kabul and the dropping of cluster bombs in populated areas are violations of international humanitarian law and must be opposed, irrespective of the cause that is being pursued.

Air Force, which had already bombed Syrian targets twice—in and —was acting as the al-Qaeda air wing. It encourages think tanks hostile to Syria and Russia and does everything in its power to shape a mainstream media narrative on Syria that can only give comfort to a group, HTS, which plays adroitly on Western consciences in the hope that assistance from the West will continue and possibly even develop into armed intervention. True, the U. The main impact of this curious attack out of the blue, following two years of complete U.

Even if the two strikes are taken entirely at face value their rarity underlines that if the U. It can only be assumed that the U. The de facto convergence between the U. We have seen this movie before, of course. At some subliminal level, the architects of U. Middle East policy seem to recognise that they have a problem with pretending that Iran has overtaken al-Qaeda or al-Qaeda-inspired groups as terrorist-in-chief. Possibly for this reason, Secretary of State Mike Pompeo has tried to smear Iran as a secret supporter of al-Qaeda, a claim no honest observer can possibly take seriously.

We shall see the answer to that if U. Syria policy succeeds, and an economically crippled and politically fragmented Syria becomes once more ungovernable, with Assad forced out of power—an outcome for which al-Qaeda must be fervently praying. Peter Ford is an expert on the Middle East.

Thank You Ambassador Ford. Finally some sense about an almost incomprehensible conflict. Going next step in the discussion; Assad regime has never attacked Israel in over 40 years, nor allowed Palestinians or Hizbollah to do so either. Assads have always protected minorities especially Christians. Assads as brutal dictators?

US ally Sisi in Egypt any less so? US instinctive opposition to Russia and Assad resulted, as Ambassador Ford explains, in irrational armed support — even today — for the very violent Islamists we are declared to defeat. Peter Ford, What kind of ME expert are you? Are you one of those with zero or negative credibility?

Creating terrorist groups in the ME by the West will never end! The wealthy but worthless regional Sheikdoms are buying the BS about the proxy wars by manning and supporting the terrorist groups! We value your opinion and encourage you to comment on our postings. To ensure a safe environment we will not publish comments that involve ad hominem attacks, racist, sexist or otherwise discriminatory language, or anything that is written solely for the purpose of slandering a person or subject. Excessively long comments may not be published due to their length.

All comments are moderated. LobeLog does not publish comments with links.